The dawn that woke me mid-week felt different. At  some level of awareness I noticed that the sky’s color, the greener foliage of the distant white pine and hemlock, and the sound perception differed from the day before. Later I realized it was a relatively “warmer” morning than the twenty plus degrees today. The sun’s angle wakes me earlier now and found me remembering a dawn witnessed in the Australian Outback. We’d gone to visit the special place the natives call Uluru, also referred to as Ayers Rock, a large sandstone rock formation in the southern part of the Northern Territory in the Uluru-Kata Juta National Park, central Australia. Inspired we found ourselves with some other hearty travelers  shivering and celebrating a magnificent sunrise atop a small rise within the Ayer’s Rock Resort. (Yes, 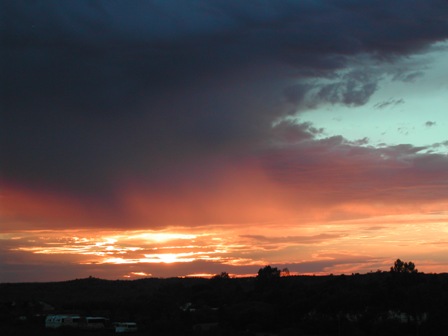 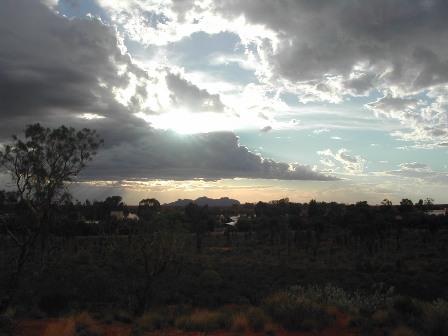 it was a cold and drizzly desert morning –was it in the 30’s or 40’s?…I remember my disappointment that the “Sounds of Silence” a star tour of the southern night sky was rained out –either the night before or that night. Memory grows hazy–it was mid-November 2005 .) Anyway, the photos taken that morning reveal Kata Tjuta or the  Olgas –named for a distant English queen. They are a group of rounded domes west of Ayers Rock–actually taller than Ayers Rock, and hauntingly beautiful.  According to the web, Kata Tjuta form part of the traditional belief system of the Anangu Aboriginal people,one of the oldest human societies in the world.  Like Uluru, hordes of tourists visit, to be awed by the natural wonder of it all. I’m sure more than a few of us felt the sacred essence of the place–something felt at a deeper level of noticing and participation. That landscape played on an internal melody–notes of  deep reverence and connection, one that I remember also being played on a sunrise hike in a desert canyon outside Tuscon….I wonder what the native Americas called that place.